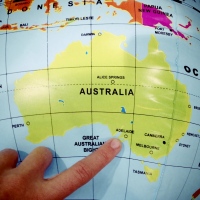 As was #1598. Despite maybe a different house being drawn?
And the New Zealanders at #1440 have been to Adelaide :)

And lastly we wanted to share with you this little bit from an ABC show here for children called Behind The News.
Some of you might see your postcards in the background!